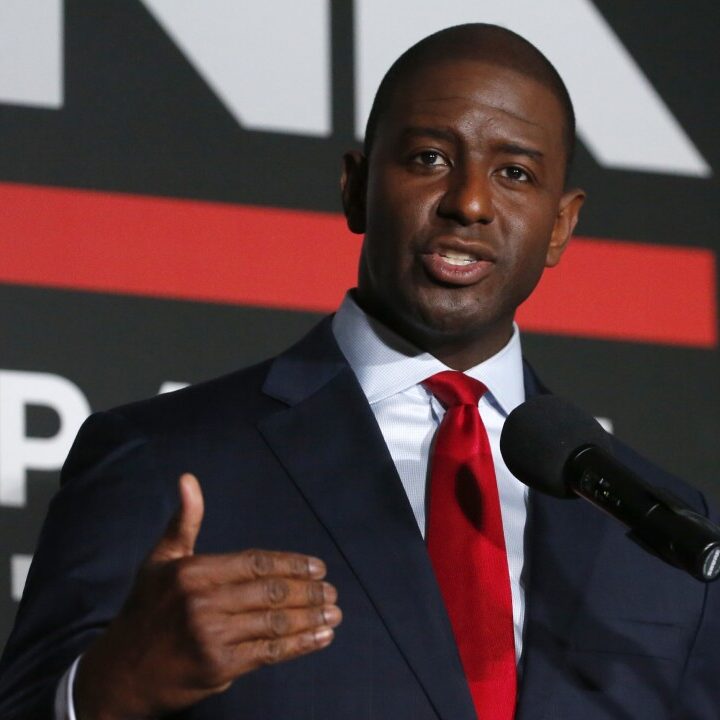 A 21-count indictment, delivered by a grand jury this year and unsealed Wednesday, accused Gillum and a longtime adviser, Sharon Lettman-Hicks, of illegally soliciting and obtaining money from various entities “through false and fraudulent promises and representations that the funds would be used for a legitimate purpose.”

Gillum, a one-time rising star in national Democratic Party circles, turned himself in Wednesday morning and had his first appearance before a federal magistrate judge hours later.

Gillum, who was in handcuffs, and Lettman-Hicks, who was in a wheelchair, entered pleas of not guilty.

Gillum and Lettman-Hicks are charged with 19 counts of wire fraud and one count of conspiracy to commit wire fraud. The wire-fraud and conspiracy charges carry penalties of up to 20 years in prison for each count.

The wire-fraud charges involve payments from a company owned by Lettman-Hicks to Gillum. The payments were allegedly made with funds that had been contributed to his political campaign committees. Gillum also was charged with one count of making false statements for allegedly lying to federal investigators in 2017.

Rumors about Gillum’s involvement in a city of Tallahassee public-corruption probe bubbled up in the months before the 2018 gubernatorial election, one of the nation’s most closely watched races that year.

But the Democrat steadfastly denied he was involved in any wrongdoing, a stance he maintained in a statement issued Wednesday.

“I have spent the last 20 years of my life in public service and continue to fight for the people. Every campaign I’ve run has been done with integrity. Make no mistake that this case is not legal, it is political. Throughout my career I have always stood up for the people of Florida and have spoken truth to power,” Gillum, 42, said. “There’s been a target on my back ever since I was the mayor of Tallahassee. They found nothing then, and I have full confidence that my legal team will prove my innocence now.”

The indictment, however, paints a damning portrait of Gillum and Lettman-Hicks and focuses on activities between 2016 and 2019, a time of Gillum’s political ascendancy.

After announcing his candidacy for governor in early 2017, Gillum resigned from a job at the liberal-advocacy group People for the American Way, where he earned $122,500, in addition to his roughly $70,000 annual salary as mayor.

Gillum began receiving “regular payments” from P&P’s bank account “purporting to be either employee wages or contractor payments,” according to the indictment.

“Between 2016 and 2019, the defendants engaged in an on-going and evolving scheme to defraud by unlawfully soliciting and obtaining funds from various entities and individuals through false and fraudulent representations and promises that the funds would be used for a legitimate purpose, but instead using third parties to divert a portion of those funds to P&P, which Lettman-Hicks then fraudulently provided to Gillum for his personal use disguised as payroll payments,” the indictment said.

Lettman-Hicks made Gillum director and vice president of P&P, listing a salary of $10,000 a month.

“However, Gillum’s position at P&P was only a cover used to provide him funds that he lost when he resigned from Organization A,” the indictment said. People for the American Way was not identified by name in the document.

Gillum and Lettman-Hicks are also accused of defrauding two organizations of $50,000 in grant money and distributing the funds — disguised as salary payments — to Gillum.

And the indictment accuses Gillum and Lettman-Hicks of defrauding a person identified only as “Individual F” of $150,000 of a $250,000 contribution to Gillum’s gubernatorial political committees. Gillum solicited the money from the donor in May 2018.

Instead of depositing the funds into the committees’ accounts, the money was wired to a separate account “managed by an acquaintance whom Gillum and Lettman-Hicks could control,” the indictment said.

Lettman-Hicks provided only $100,000 of the contribution to Gillum’s Forward Florida committee and steered the rest of the funds to P&P “by arranging a fraudulent contract … to allegedly provide services on a voter education program regarding the gubernatorial candidates, knowing that these services would not be performed,” the 26-page indictment alleged.

The money was then disbursed to Lettman-Hicks and Gillum, according to the allegations.

Marc Elias, an attorney for Gillum, said Wednesday in a statement that the “government got it wrong.”

“The evidence in this case is clear and will show that Mr. Gillum is innocent of all charges,” Elias, a high-profile national elections attorney, said.

Prominent Orlando attorney John Morgan, a political rainmaker who contributed $250,000 to Gillum’s campaign in 2018, has threatened to sue Gillum for sitting on campaign cash in the weeks leading up to the 32,000-vote defeat to DeSantis. Morgan said he and his law firm contributed more than $1.7 million to the Democrat’s campaign effort.

When asked if he was the person identified as “Individual F” in the indictment, Morgan said, “I could be.”

“Anything is possible with that guy. He kept all of our money and lost by a fraction. He destroyed the Democratic Party in Florida. I quit because of him,” Morgan said in an email. “When you hire Marc (Elias) you are in deep doo doo.”

Gillum has largely been out of the spotlight after a 2020 incident in a South Beach hotel room, where a man reportedly overdosed. Gillum was in the room and a police report said he was “unable to communicate with officers due to his inebriated state.”

In March 2020, Gillum announced he was going into a rehabilitation facility because of alcohol abuse. He also said he we was bisexual.

News of Gillum’s arrest sent a shockwave through Tallahassee on Wednesday.

The indictment also accused Gillum and Lettman-Hicks of steering $60,000 for get-out-the-vote efforts from the campaign to her communications company and using some of the money to issue six $5,000 payments to Gillum, including four marked as “end of year bonus.”

Allegations date back to October 2016, when a person identified in the indictment as “Individual B” asked two undercover agents for a $25,000 contribution to a political committee supporting Gillum’s run for governor. One of the agents told the individual that, if he were to donate that much money, “he would want something very significant in return.”

“Individual B repeatedly stated that would not be a problem,” the indictment said.

The individual told the undercover agents to funnel the payment through P&P Communications, promising that Lettman-Hicks would be substantially involved in Gillum’s campaign, prosecutors alleged.

In June 2017, Gillum voluntarily agreed to speak with FBI agents, but the indictment accused him of lying.

Gillum “did knowingly and willfully make materially false, fictitious, and fraudulent statements and representations” during the FBI’s probe, one of the charges alleged.

Crews put out fire at Brickell City Centre; no injuries