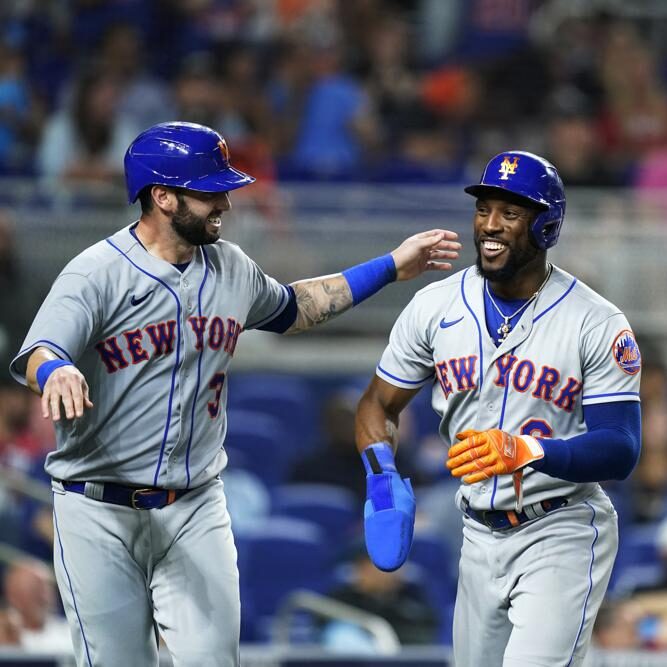 MIAMI — Francisco Lindor homered, doubled and drove in four runs to lead the New York Mets past the Miami Marlins 5-3 on Friday night.

All three runners scored on Lindor’s bases-loaded double in the sixth that gave New York a 5-2 lead.

Miami starter Sandy Alcantara (7-3), who entered with a 1.72 ERA, gave up five runs — four earned — and six hits in seven innings. The right-hander has gone at least seven innings in nine straight outings.

“He’s one of the best,” Mets manager Buck Showalter said. “We were fortunate to get a well-pitched game to keep it close so we could do some things.”

Prior to Lindor’s double to deep right-center, Starling Marte appeared to ground into a double play. But the Mets successfully challenged that second baseman Willians Astudillo failed to tag runner Brandon Nimmo, and Marte beat Astudillo’s throw to first. Tomás Nido, who led off the inning with a single, reached third.

“It changed the momentum for our side,” Lindor said.

Added Showalter: “The play continues but you can’t penalize the runner for the out call. It kind of stops him. Nimmo made a good running play there.”

Marlins manager Don Mattingly considered it a byproduct of replay that Nimmo was allowed the base.

“It’s something that, when he calls him out, if it was my runner, I’m gonna say he stopped because he called him out,” Mattingly said. “Really, I think it’s just a replay rule more than anything.”

Astudillo entered in the sixth after Jazz Chisholm Jr. left because of back spasms.

Garrett Cooper’s two-out walk against reliever Drew Smith with the bases loaded in the bottom of the seventh got Miami within 5-3. Adam Ottavino retired Jesús Aguilar on a fly to center and pitched a scoreless eighth.

Edwin Díaz worked around two singles in a scoreless ninth for his 15th save.

In addition to his second consecutive win over the Marlins, Walker picked off NL stolen base leader Jon Berti at first in the opening inning. Nido, the Mets’ catcher, also threw out Berti on an attempted steal in the ninth, ending his string of successful attempts at 21.

“He stole two off me the last time so I was pretty close to picking him off the last game,” Walker said. “He’s going to run. I felt if you get a pickoff early, it shuts down the running game the rest of the day.”

Canha broke a 1-all tie with a solo homer off Alcantara in the fifth. Alcantara had retired 11 straight before Canha’s drive that landed in the left-field seats.

The Marlins responded in the bottom half when Berti scored on Jorge Soler’s groundout. Berti hit a one-out single and advanced to third on Chisholm’s single to right.

Lindor gave the Mets a quick lead with his solo shot in the first. He drilled Alcantara’s 99 mph sinker over the wall in center for his 12th homer.

“One of the top pitchers in the league, for sure,” Lindor said. “I had a good plan and I executed it.”

It was the first home run allowed by Alcantara since May 11, a stretch of 61 1/3 innings.

“Lindor got me tonight,” Alcantara said. “He was aggressive. I want to give some credit to him. I lost the fight tonight.”

Cooper’s run-scoring single in the bottom half tied it.

The Mets reinstated C James McCann from the injured list and optioned C Patrick Mazeika to Triple-A Syracuse. … RHP Seth Lugo was activated from the paternity list Thursday and RHP Yoan López was optioned to Syracuse.

Mets: RHP Max Scherzer (oblique strain) will not be activated to start the series finale Sunday. Showalter said Scherzer is making progress but isn’t where he needs to be yet. He could make a second minor league rehab start before rejoining the big league rotation. … Depending on the outcome of his bullpen day, RHP Carlos Carrasco (lower back tightness) could make his next scheduled start.

Marlins: INF Miguel Rojas was a late scratch because of a bone bruise in his right foot. … 3B/OF Brian Anderson (mild disk bulge) was the DH for Triple-A Jacksonville. Anderson played five innings at third base with the minor league club Thursday.

Before the game, there was a moment of silence to commemorate the one-year anniversary of the collapse of a 12-story residential building in the neighboring city of Surfside. Ninety-eight residents died in the collapse.