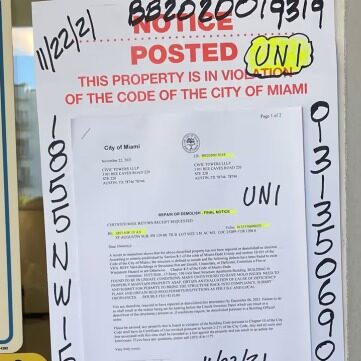 MIAMI – Miami building inspectors returned to the troubled Civic Towers Apartments on Tuesday and issued yet another violation.

The new notice cites mold in several units and it gives property managers until Dec. 6 to fix the ongoing issues or face demolition.

On Monday, the building’s two elevators were still out of order and instead of fixing the problem, the property manager called the police.

“They called the police on us saying we were harassing them,” Darianne Diago said. “I’m just trying to fix everything in the building for all the elders living here … There’s people with wheelchairs, people with walkers that can’t even move,” said Diago.”It’s like if they’re in jail. That’s what they’re living right now.”

Anolan Velazquez, 80, lives on the 18th floor. She said she has been in pain after having to make a trip to the pharmacy. Firefighters have had to waste time going up and down the stairs while responding to residents who needed help.

The U.S. Department of Housing and Urban Development released a statement on Tuesday saying the privately owned property has a contract with HUD to provide rental subsidies for low-income families.

Property representatives with Arco Management told HUD they are working with an elevator company and hired a security company.