Skip to content
Sports betting may be heading to Florida in deal agreed to by DeSantis, Seminole Tribe 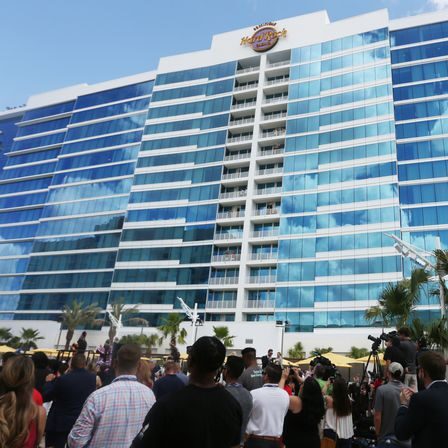 More than half of all states now allow some form of legal sports betting, and if a proposal which has been agreed to in principle between the Seminole Tribe of Florida and the state gets approved by the Legislature in the next week, Florida could be added to that list and at least $500 million could be added to the annual budget.

The concept is central to an agreement in concept reached this week between the Tribe and Gov. Ron DeSantis, according to five sources who represent parties in the negotiation and were briefed on the deal but were not authorized to speak on the record.

Seminole Tribe of Florida Chairman Marcellus Osceola Jr. said in a statement to the Times/Herald that the deal negotiated this week with Gov. Ron DeSantis was a “historic agreement that cements our partnership with the state for decades to come,” and thanked the governor, Senate President Wilton Simpson and House Speaker Chris Sprowls for working with the Tribe.

“The Seminole Tribe of Florida is committed to a mutually-beneficial gaming compact with the State of Florida and looks forward to its approval by the Florida Legislature, the Seminole Tribal Council and the U.S. Department of the Interior,” Osceola said.

But with only one week left in the regular legislative session, hammering out the details of the complex agreement and getting lawmakers to ratify it may be too heavy a lift. Sprowls said late Thursday that if the governor signs the compact, they will return for a special session to pass it.

“Once we actually get to see the words on the page, I would anticipate that there may be a special session to address those issues,’’ he told reporters.

In March, Simpson joined with DeSantis to tell the parimutuel owners they were “getting close” on an agreement to provide the state’s parimutuels with the ability to license sports betting operations from the Tribe. An offer emerged earlier this month, as first reported in the Herald/Times, but the Tribe balked. Talks continued, and the legal framework of the proposal is now being finalized, with an announcement possible by the end of the week, five sources who were briefed on the deal said.

There also are legal hurdles: Would the deal violate the constitutional amendment passed by voters in 2018 that requires voter approval of all new games unless they are authorized in a compact? Would this win the approval of federal Indian gaming regulators who insist there is exclusive value to the tribe if it is going to make payments to the state? Supporters of sport betting say that by having the Tribe be the online hub for sports betting, it does not violate the constitutional requirements.

The plan would inject needed cash into Florida’s ailing parimutuel industry by allowing it to operate mobile sports betting on existing sites in exchange for a cut of the proceeds of as much as 55 percent.

The Tribe, however, would be the big winner. The owners of the Hard Rock Hotel & Casino would be given the exclusive right to operate craps and roulette at the Tribe’s seven casinos and, significantly, to operate as a sports betting hub for booking agents who would be housed at professional sports stadiums and existing casinos, slots facilities and parimutuel poker rooms. No competitor would be allowed within 100 miles of their facilities. The Miccosukee Tribe and its gaming facility west of Miami would not be a part of the deal.

The Tribe would take a cut out of every sports bet placed but parimutuels and the Tribe could negotiate with companies such as Barstool, DraftKings and FanDuel to operate their online retail betting books.

The Tribe would also be allowed to add up to three additional full gaming casinos on existing tribal property. The new sites are expected in Hollywood, Tampa and Brighton, where it could lease new hotels to casino operators such as Wynn Resorts, Sands and MGM. There would be caps on the number of gaming tables allowed.

And, in a major concession to the 26 racetracks, jai-alai frontons and racinos around the state. the Tribe would agree to drop its objection to having existing parimutuels operate designated-player card games, a hybrid between blackjack and poker which the Tribe considers competition to its blackjack operations.

No guarantee of a Fontainebleau casino

For Miami, the prospects of the deal carry risk. The Tribe would not object to legislation allowing Jeffrey Soffer, the real estate mogul, to transfer his casino permit to the Fontainebleau Hotel on Miami Beach, a concept known as portability. Soffer has used his superyacht, his friendship with the Tampa Bay Buccaneers’ Tom Brady, and $1.1 million in contributions to influence the governor and legislators to allow the move.

But such a policy shift would also require lawmakers to approve formal legislation to allow the transfer as well as legislation to preempt local zoning laws.

Armando Codina, the business leader who along with auto magnate Norman Braman has hired lawyers to fight the expansion of gambling in Miami-Dade County, said the proposal expands gambling in Florida and is in violation of Amendment 3 which was passed by voters in 2018 and requires voter approval of any gambling expansion. He vows to sue.

Under the federal Indian Gaming Regulatory Act, legislative approval and the governor’s signature aren’t enough. It has to pass muster with the federal agency overseeing Indian gaming, so before the compact can take effect it ultimately has to be approved by the U.S. Secretary of the Interior Deb Haaland, a member of New Mexico’s Laguna Pueblo and the first Native American to hold the position.

Under the plan, the Seminole Tribe would pay the state between $500 million and $600 million a year in annual payments for the next 30 years, a significant expansion over the 15-year agreements in the past.

The Tribe stopped paying the state $350 million in annual revenue sharing in 2017, after former Gov. Rick Scott refused to crack down on parimutuels operating designated-player games. Some estimates say that after the first five years the annual payments to the state could grow as gaming expands to as much as $1 billion annually.

But the biggest win for DeSantis in the deal is the arrival of sports betting and the promise of injecting new life into ailing parimutuels, who have relied on card games and declining racing revenues to keep their operations alive. The plan would allow people to go to a professional sporting event at arenas, football and baseball facilities, or an existing gaming venue and place bets with all wagers being handled from a server on the Tribe’s property.

At least 29 states and the District of Columbia allow some form of legal sports betting and if Florida approves it, it would become the most populous state to do so and perhaps rival Nevada as the biggest gambling tourist destination.

Industry estimates are that sports betting could be a $2 billion market in Florida, and while there’s not a lot of profit in sports wagering, unlike slot machines which have big margins, the activity attracts people to facilities.

“Florida has the potential to be a true sports gaming destination, particularly of you involve the teams in the economic pipeline,’’ said Daniel Wallach, a Hallandale Beach lawyer who specializes in sports and gaming law.

The Legislature is central to authorizing a new compact. The Florida Supreme Court ruled that the Legislature, not the governor’s office, controlled Indian gambling compacts, forcing then-Gov. Charlie Crist to redo the first compact approved with the Seminole Tribe.

Lawmakers have moved two bills this session, one to create a Gaming Control Commission and another to end the requirement for live racing and jai-alai matches at South Florida casinos, except at thoroughbred race tracks Tampa Bay Downs and Gulfstream Park.

The argument supporters of sports betting make is it is not a casino game and only casino game expansion requires a statewide referendum under Amendment 3. Until it’s tested before the court, no one knows how it will be interpreted.

John Sowinski of No Casinos, which ran the Amendment 3 campaign, says they firmly believe that an expansion of sports betting violates the Constitution and needs voter approval.

“Our position is that sports betting is subject to amendment and for any of the folks who wanted to say otherwise they are arguing with themselves, not us,’’ he said.

Today at the final of the World Cup, I only hope the players on the field and the whole world remembers that there’s a man and fellow footballer called Amir Nasr, on death row, only for speaking in favor of Women’s rights.