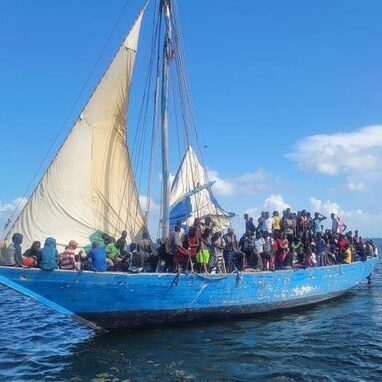 MIAMI – Miami-Dade Fire Rescue and U.S Coast Guard boats arrived to the scene of a vessel filled with a large number of migrants.

7Skyforce hovered over the scene near the island Boca Chita before noon, Thursday.

Customs and Border Patrol are investigating the reported incident.

According to the U.S Coast Guard, there are about 100 or more migrants on board the vessel.

The Coast Guard said that the vessel was stuck in the sand and the vessel is still stuck at sea.

It was an all-hands on deck situation as MDFR and all local partners responded to the scene.

The Coast Guard also provided life-jackets earlier to the migrants on board to make sure they were safe.

Initially, two women and a child were airlifted to the hospital.

One person on board was being medically evaluated and was put on a stretcher and taken to a Coast Guard boat. MDFR dispatched air rescue and the person was transported to a nearby hospital.

The condition of that person is not known.

The U.S. Coast Guard Southeast tweeted out a statement on the vessel carrying the large number of migrants:

Earlier in the year, 350 Haitian migrants were spotted off Key Largo.

The Coast Guard also said that those migrants will be repatriated. It’s unclear where the migrants traveled from.