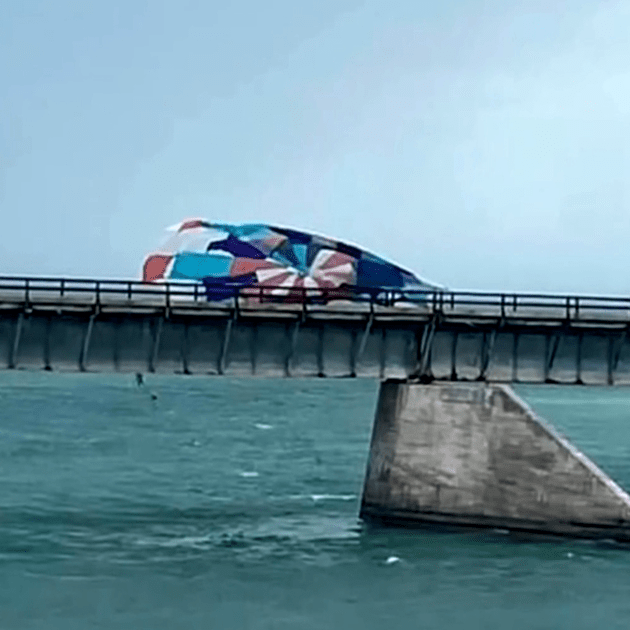 SOUTHWEST MIAMI-DADE, FLA. – Newly surfaced cellphone video captured the moment when members of a family visiting the Florida Keys were dragged by a parasail before they crashed into the old Seven Mile Bridge, leaving a mother dead and sending two children to the hospital.

The footage showed the woman, her son and her nephew as they were dragged through the water near Marathon on Monday. The crew aboard the green parasail boat were seen a distance away trying to keep up.

The victims in the Memorial Day tragedy, who were visiting from Illinois, were attached to the chute as it skimmed across the water and slammed into the bridge, located close to Pigeon Key.

The woman, 33-year-old Supraja Alaparthi, was pronounced dead at the scene. Rescue crews transported the injured children, ages 9 and 10, to the hospital.

Wednesday afternoon, one of the boys remains at Nicklaus Children’s Hospital in unknown condition. The other boy suffered cuts and bruises and has been released.

Investigators initially believed the tow rope snapped from high winds, but according to a new report, the boat’s captain cut the line after the parasail pegged, meaning it was at its highest point and could not be controlled.

John Callion, a good Samaritan who witnessed the harrowing moments, said he rushed to the bridge and pulled the victims into his boat.

“I saw the parachute hit the bridge, and the people were just going to be dangling when I got there, but actually it was a much worse situation,” he said.

Callion met with first responders at the nearest dock in Marathon.

7News cameras on Tuesday captured the Airborne, the parasail boat involved, docked a few miles away from the incident.

An employee of Lighthouse Parasail, the company that owns the vessel, said they are devastated and cooperating with authorities.